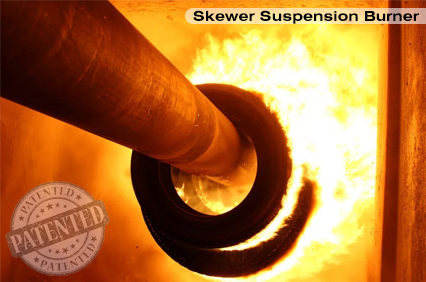 Precalciner kilns are typically limited in the amount of whole-tyre fuel they can burn because the tyres are fed into the low oxygen environment of the kiln backend. This causes localized reducing conditions leading to excessive sulfur buildup in the riser duct and upper vessels. It’s common to see tyre feed rates limited to 5% to 10% because of this approach. To overcome these limits AFS Technology LLC of Tipp City, Ohio, USA has developed the Skewer Suspension Burner. This enables cement plant operators to retain the whole-tyre fuel in the optimal burning position of the oxygen rich calciner. As a result, precalciner kilns can use higher amounts of whole-tyre fuel without creating additional CO or SO2 from tyre combustion.

The first patented Skewer Suspension Burner was commissioned in February of 2013 by AFS Technology at a USA-based cement plant operating a 6,400 metric tpd FLS precalciner kiln. This first project is effectively a prototype capable of burning car and truck tyres up to 1220 mm in diameter. Provisions were made to add a second skewer burner to effectively double the tyre feed rate.

Initial Concerns
There were many concerns at the start of the Skewer Suspension Burner project. For example, would the skewer rod survive the calciner heat conditions? Would heavy buildup material fall on the cantilevered skewer rod and damage it? Would the tyre wire go down into the kiln rather than up with the high velocity gas flow? And, most importantly, would the process burn the target feed rate of 3 metric tph without increased CO or SO2 issues?

As with most prototypes, there are many lessons to be learned and, if all goes well, encouraging results to be found. In the case of the Skewer Suspension Burner, there were plenty of both.

Performance Results
Since commissioning, the most encouraging result is the ability to reach a 3.4 metric tph whole-tyre feed rate without additional sulfur buildup issues. As expected, we found a direct correlation between the length of the skewer rod and the feed rate. Anecdotal evidence showed that the feed rate was further increased by burning the fuel closer to the center of the calciner.

Another encouraging result is the life of the skewer rod. The rod is made of a high-temp alloy rated for 1,200°C, which has lasted 18 months — nearly twice as long as we had expected. The alloy exhibited no apparent pitting or oxidation during this time. However, the reason for replacing the rod at 18 months was a slow bending of the rod, which in metallurgy is called thermal creep. This effect can be minimized in future systems by automatically rotating the rod at programmed intervals.

The question of tyre wire buildup faded after a short period of operation, as nearly 100% of the wire made its way down the riser duct and into the kiln. Concerns of heavy buildup material falling on the skewer rod also faded, as the skewer rod was located just above the tertiary air duct – a location typically above the heavy buildup.

Truck Tyre Performance
Initial testing with heavy truck tyres – approximately 1,100 mm diameter and 45 kgs in weight – showed very promising results. Since truck tyres weigh about 5 times more than car tyres, yet occupy about the same amount of space on the skewer rod – in theory – approximately 5 times more fuel could be burned using truck tyres than when using car tyres. More testing is needed, but with initial rates approaching 4 tph and no signs of CO, SO2 spikes or tyre wire issues, truck tyres could be the perfect fuel for the skewer.

Some Issues and Solutions
AFS collaborated with members of the plant operations team to develop several modifications that improved safety, reliability and operational functions. The greatest challenge we faced was limiting downtime for the prototype. Downtime occurred primarily because of the hydraulics, the electrical position sensors of the rams and gates, and the short length of the hot ram. Techniques for improving uptime became clear over several months of operation because many issues were interrelated.

Reliability issues caused by hydraulics and electrical position sensors were greatly reduced by using electric servomotors. A visit to an automobile manufacturing facility revealed the reliability and power capabilities of servomotors. The plant had replaced nearly all of their hydraulic systems with electric servomotors. We were skeptical as to whether servomotors would be appropriate for a cement plant application, as were most cement managers we spoke with. We were fortunate to team up with Yaskawa, a leading servomotor manufacturer, who supplied equipment and services to test a servomotor in place of a hydraulic motor in the skewer prototype. Since January 2014, the servomotor has operated with 100% reliability. The servomotor has enabled precise positioning of the loading ram without the need for external positioning sensors. As well, the servomotor has smooth acceleration and deceleration and feedback information not available with the previous hydraulic motor arrangement. Servomotors are available with high protection ratings, such as IP67 and NEMA 4X. Their copper windings are typically rated for temperatures up to 200° C. With this experience, we feel confident in using servomotors to power the second generation skewer systems.

Factors we did not anticipate in designing the prototype were the compressibility of the tyres and the friction load caused by the tyres and tyre wire on the skewer rod. In the prototype, the hot ram moves the tyre fuel along the skewer, through the airlock chamber, past the hot gate, and approximately 15 cm into the calciner. The tyres compress as the hot ram pushes them into the calciner and decompress as the hot ram retracts. In some cases, because of the tyre wire friction, this backward decompression can be more than 15 cm and obstruct closure of the hot gate. It became clear that a longer hot ram would be required to reliably close the hot gate –- a vitally important function. The second generation skewer hot ram will have a range of up to 2.5 meters past the hot gate. It will also be servomotor actuated with programming to position the fuel load at an optimal burning position. The new hot ram will also have increased thrust.

Automatic skewer rod rotation extends the skewer’s life: Though the skewer rod performance has exceeded our expectations, maximum life can be achieved with regular rotation. The rotation will counteract the thermal creep and extend the life expectancy to 24 months.

A longer hot ram optimizes the burning of fuel: The new servomotor-powered long stroke hot ram will improve the positioning of the fuel load to optimize combustion and increase overall reliability.

Video [vision] technology inspects tyres before delivery to the loading chamber: Located at the ground level, the system with pre-programmed definitions of acceptable tyre shapes will reliably reject non-conforming fuel.

Dual Fuel Systems
AFS Technology also provides Dual Fuel Feeding Systems to enable cement kilns to burn RDF, PEF and other bulk wasted fuels in addition to whole tyres. A recent development by AFS is the Dual Inclined Belt Conveyor, with has two belts: one flat belt on top for whole tyres and a 200-mm diameter pipe belt down the middle of the truss frame for bulk fuels. This conveyor saves cost and space when dual fuels are desired by the customer.

International Patent Status
In 2014, AFS Technology was awarded a US patent on the Skewer Suspension Burner and has patents pending in China, Russia, India, EU, Brazil, Mexico and Canada.