Why choose our patented tire suspension burner systems? Typically, the maximum fuel substitution rate for whole tires fed to the low oxygen backend of a precalciner kiln has been less than 5%. Above this rate localized reducing conditions will likely cause significant sulfur build-up in the kiln riser duct and upper vessels, resulting in production problems.

In 2001 – AFS, along with Cementos Melon in Chile, developed the Rack-Style Suspension Burner, which was designed to burn tires in the oxygen rich calciner rather than in low oxygen kiln backend. This was very successful in eliminating the sulfur buildup issues, but the high end feed rate was still limited to about 1 ton per hour per burner.

In 2012 – AFS developed (and patented) the Tire Skewer Suspension Burner, which burns tires in the calciner at a rate of 3 to 4 tons per hour per burner without sulfur buildup issues affecting production. 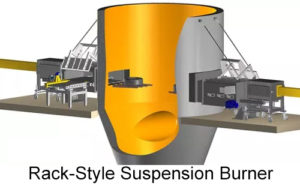 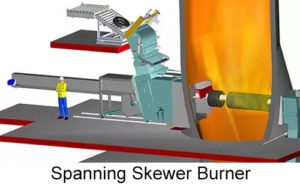 This Tire Skewer design enables cement plant operators to retain the whole-tire fuel in the optimal burning position of the oxygen rich calciner. As a result, precalciner kilns can use higher amounts of whole-tire fuel without creating additional CO or SO2 from tire combustion. 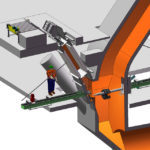 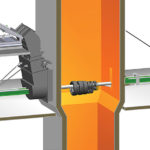 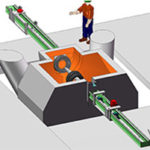 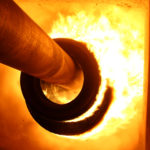